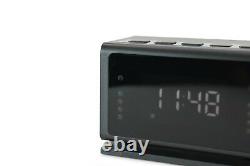 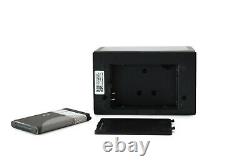 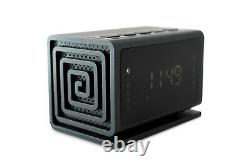 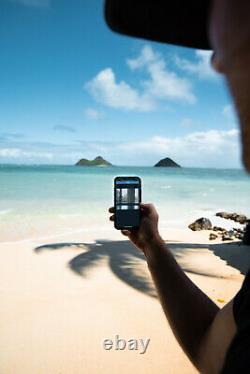 Even with all of these features, the NiteClock is also portable with remote control capabilities as well. Included is the replaceable rechargeable Lithium-Ion battery, the NiteClock can record for 24/7 when left plugged in. The NiteClock will excel at meeting your surveillance needs whether in a home, office, dorm or hostel, and various travel safety needs. Just A Clock Design: The NiteClock uses an elegant and natural desktop clock modern design.

It comes in black with white LED display and it blends well into almost any home or office décor. Its unassuming look adds to its stealth surveillance appeal. Plug or Battery: The NiteClock includes a replaceable long-lasting Li-Ion battery.

It offers up to 3-Hours of recording in motion detection mode on battery. 24/7 Recording when plugged in.

WiFi Video Streaming: The ClockCamWiFi can stream video/audio directly to your smartphone via WiFi/App. 802.11b, 802.11g, and 802.11n wireless networks at 2.4Ghz. REAL Night Vision: The NiteClock is equipped with night vision recording capabilities. It integrates 940nm wavelength infrared LEDs that are undetectable by the human eye, which makes the NiteClock a truly stealth night vision recorder. Motion Detection: The NiteClock has built-in motion detection that provides automatic recording whenever movement is detected within its field of view.

Stealth LED Indicators: During video recordings, the NiteClock turns off indicator lights when a recording has been activated, avoiding the typical constant blinking most devices on the market produce. Dual Clock Modes: The NiteClock can be set for Standard American Time 12-hour or Military time 24-hour time.

The Alarm: The NiteClock allows the setting of up to three different simultaneous alarms and it incorporates a loudspeaker for a traditional obnoxious alarm sound. 24/7 Plug Recording: The NiteClock can record in continuous mode or motion detection mode while charging allowing for an indefinite video/audio recording session.

This item can be shipped to United States.